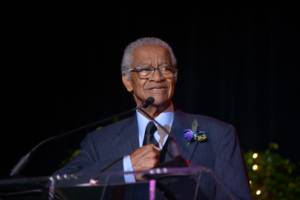 The late Dr. Aaron Shirley was Mississippi’s own champion of civil rights and front-runner in healthcare innovation. Through Dr. Shirley’s commitment to addressing health and socioeconomic disparities for minorities, he’s blazed an unambiguous trail in American history.

In 1996 Dr. Shirley’s vision transformed the desolate Jackson Mall into a thriving healthcare, educational and retail hub known as the Jackson Medical Mall.   The mission, to provide healthcare for the underserved and to promote economic and community development, was made possible through strategic partnerships with UMMC, Jackson State University and Tougaloo College.

20 years later, the Jackson Medical Mall sits proudly in the center of the state’s capital city, providing high quality health and community services to the public. To date, the Jackson Medical Mall is the only place in the country of its kind. This one-of-a-kind Mall began as a result of one man’s vision, and it continues to blossom in the footprint of one man’s legacy.

What will be your legacy?